When it comes to network monitoring, Ethernet TAPs are crucial because SPAN ports on switches may have been compromised and drop packets because of overload. TAPs are the one and only way to get access to see what’s really happening on the physical link without dropping packets.

Using network TAPs will allow you to get in the path of the packets and to relay traffic to the monitoring device without altering the timing between packets. Most importantly, network TAPs provide a fault-tolerant means of getting inline. As a network administrator, you need to be alert for the case when the network TAPs fail, for instance, due to loss of external power.

In the case of power loss, some TAPs are designed to fail-over and continue to pass packets through. The main challenge here, however, is about selecting a network TAP that can recover the fastest, after power outage.

When measuring your network's performance while dealing with power loss conditions, you should consider looking at the network recovery time especially in mission-critical environments. This is to prevent any interruption in traffic flow to or from the network. The question is, how long does it take for a network TAP to recover from a power failure? Well, this can vary greatly depending on the TAP vendor. Learn more why we need to use network TAPs here.

Let's have a look at the test results of Profitap Gigabit Copper TAPs recovery time compared to other Gigabit TAP vendors on the market. The test was done by Mike Pennacchi to measure the recovery time of the Gigabit TAPs by calculating the amount of time it takes for each TAP to recover from a power failure and then to recover from regaining power. 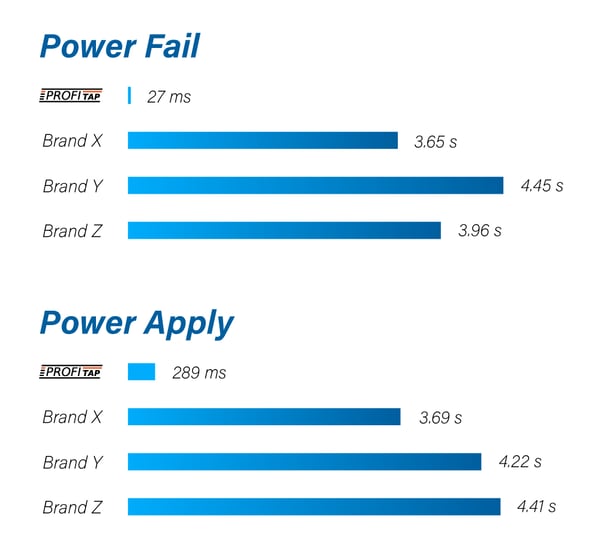 As you have seen in the video, when being compared with other network TAPs, Profitap's network TAPs can perform recovery between 27-289 milliseconds. A faster recovery time when a single fault occurs on the network than other TAPs vendor. Sure, it's milliseconds-fast, but does it matter? YES! Most of network TAPs are typically used in inline applications, which is why any delay above 300 milliseconds will cause the network link to renegotiate.

In designing and creating our network TAPs, we wanted to ensure on a very short network recovery time. Profitap's network TAPs has a functionality which dramatically reduce fail-over time. This means, the traffic received from the network will pass through the network TAPs even when the power is disrupted. Discover more about the different types of network TAPs here.

Interested to learn more about our network TAPs? Click the button below and discover how Profitap's network TAPs help you in gaining complete visibility of your entire Ethernet Network.