What Are Network TAPs? And Why Do We Need Them?

When you think of the word tap, what comes to mind?  Perhaps you imagine it to be a water tap or faucet on a sink for getting water or maybe the tap on a keg of Beer?  If you are a well-seasoned traveler, you may know TAP is also the Logo for Air Portugal airline which technically isn’t a word.

What is a Network TAP?

Well in our case, “TAP” is an acronym for “Traffic Access Point” or “Test Access Point” and is a hardware device inserted at a specific point in a network where data can be accessed for testing or troubleshooting purposes. Network TAPs are mainly used to monitor the network traffic between two points in a network infrastructure.

Typically, a network TAP is placed between two points in the network. The network cable between points A and B is replaced with a pair of cables, which are then connected to the TAP. Traffic is passively routed through the TAP, without the network’s knowledge. This allows the TAP to make a copy of the traffic, which is sent out of the monitoring port to be used by another tool without changing the network traffic flow. 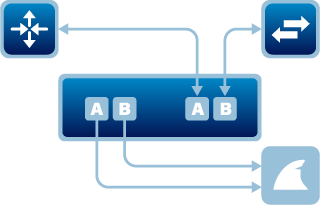 Why do we need a Network TAP?

There are different methods for gaining access to your network. Some of the traditional methods used for gaining access to network traffic include using a SPAN/VACL port on your switch or connecting a monitoring device in-line on the network. There are challenges with both scenarios and are easily resolved with a TAP without introducing a point of failure.  The Network TAP (also known as a Breakout TAP) is the only TAP that will guarantee copying all of the network traffic, including errors,  to the monitoring ports A and B.  Monitor port A gets the Eastbound traffic and monitor port B gets the Westbound traffic.

What are other types of TAPs used on a network?

Although the Network TAP is the TAP that lets you see all the traffic running through your network, there are other types of TAPs that can be used on a network. Two for when it is not important to see all of the traffic and one to be used with monitoring in-line devices like an Intrusion Prevention System (IPS).

SPAN/Regeneration TAPs will permit you to take unidirectional traffic from one network segment and send it to multiple monitoring tools. This allows you to send a single traffic stream to a range of different monitoring tools, each serving a different purpose.

Bypass TAPs (also known as In-Line TAPs) allow you to place an active network tool "Inline" on your critical links. These TAPs are used where monitoring devices need to be placed inline on the network to be effective but putting these devices inline will compromise the integrity of a critical network.  By placing a Bypass TAP in place of the monitoring appliance  and connecting the monitoring tool to the Bypass TAP, you can guarantee that the network link will continue to flow, and the in-line device will not become a ‘point of failure’. 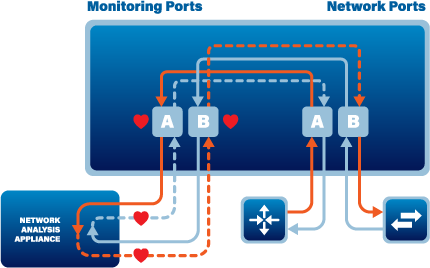 There are different problems when a tool is installed in-line. Especially when dealing with a critical network, it is essential that the network is available all the time because down time can be very costly. When a device is installed in-line, the network must be brought down every time updates are required, or the tool needs to be re-booted. Similarly, if the monitoring tool fails, the network will go down as well.

These problems can be resolved by using a Bypass TAP. When using an In-Line TAP, you will be guaranteed that every packet being sent from the network will get to the monitoring tool. Because these devices can never be over-subscribed, they always pass every packet including layer 1 and layer 2 errors. 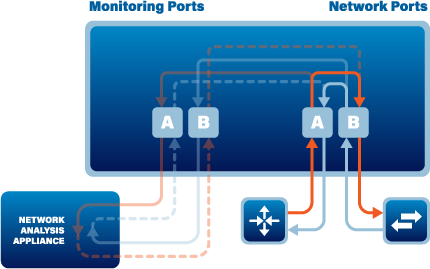 I have presented a few reasons why you may need to deploy Network TAPs, Aggregating TAPs, SPAN/Regeneration TAPS and Bypass TAPs into your network.  Soon, I will show you how TAPs combined with ‘Packet Brokers’ provide even more useful ways to keep your network safe.