When it comes to monitoring network traffic, there are two main choices if you don’t want to stand directly behind the user as they go about their business. This article will give a general overview of a TAP vs SPAN (Switch Port Analyzer).

For an in-depth breakdown, packet sniffing expert Tim O’Neill has several pieces on networkpedia.com that delve into granular details, but we will take a much more general approach.

To begin with, Port mirroring, also known as SPAN or roving analysis, is a method of monitoring network traffic that forwards a copy of each incoming and/or outgoing packet from one or more port (or VLAN) of a switch to another port where the network traffic analyzer is connected. SPAN is often used on simpler systems to monitor multiple stations at once. 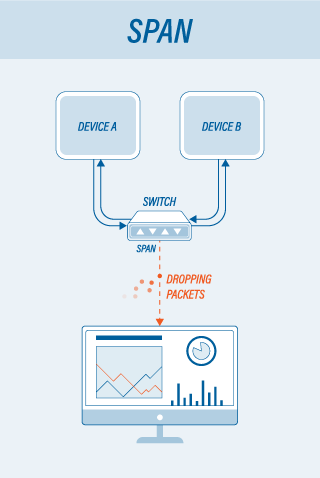 The exact amount of network traffic that this tool is able to monitor depends on precisely where the SPAN is installed in relation to the data center equipment. You might get only what you want to see, and you can easily wind up seeing much more than you need. Spanning an entire VLAN, for instance, can result in multiple copies of the same data, making LAN troubleshooting more difficult, as well as impacting the speed of the switch’s CPU or affecting Ethernet throughput tests.

Basically, the more you SPAN, the more likely you are to drop packets. However, the fact that SPANs can be managed remotely, unlike network TAPs, means that changing the configuration is less time consuming, but still requires a network engineer.

SPAN ports are not a passive technology, as some have claimed, since they can have other measurable effects on network traffic, including:

- Changing the timing of the frame interactions

- Dropping packets due to oversubscription

SPAN ports are, therefore, better suited to situations where dropped packets do not affect network analysis, or where cost is an issue.

In contrast, a network TAP (Test Access Point) requires money to be spent upfront on the hardware, but as a bonus it doesn't require much setup. In fact, because it is a passive tap, this device can connect and disconnect to the network without affecting it.

TAP devices provide a way to access the data flowing across a computer network, typically for the benefit of network security and performance monitoring tools. The monitored traffic is referred to as the “pass-through” traffic and the ports used for monitoring are called “monitor ports.” For a greater visibility into the network, a TAP can be placed between the router and the switch.

Additionally, there are different types of TAPs depending on the type of cable, including fiber optic TAPs and gigabit copper TAPs. Both work in essentially the same way, splitting part of the signal off to the network traffic analyzer while the main signal continues on uninterrupted. For fiber optic TAPs, it is the light beam that is split in two, while in the copper system, the electrical signal is copied.

To begin with, SPAN ports are not adequate for full duplex 1G links. Even under circumstances that seem to fall below their maximum capacity, they can quickly become overburdened and drop packets. This can also happen because the switch prioritizes regular port-to-port date above SPAN port data. Unlike a network TAP, SPAN ports filter out physical layer errors, making some types of analyses more difficult, and as we have seen, incorrect delta times and altered frames can cause additional problems. TAPs, on the other hand, can run full duplex 1G links.

TAPs can also handle full packet captures and carry out deep packet inspections for protocol, non-compliance, intrusions, etc. Because of this, TAP data are admissible in a court of law as evidence, whereas SPAN port data are not.

Security is another area where there are differences between the two technologies. SPAN ports are often configured for unidirectional traffic, but they can also receive traffic in some instances, creating a critical vulnerability. Conversely, TAPs cannot be addressed, have no IP address, and therefore cannot be hacked.

SPAN ports do not normally pass VLAN tags, which can lead to difficulties finding VLAN issues, but then TAPs cannot see the entire VLAN at once. TAPs don’t give both channels in the same trace without the use of an aggregator tap, but you have to be careful regarding oversubscribing. There are some aggregating TAPs, like Profitap Booster, for example, that can aggregate eight 10/100/1G ports to one 1G-10G output. Our Booster is able to insert VLAN tags to ingress packets. This way the source port information of each packet is forwarded to the analyzer.

SPAN ports are still a useful tool for network administrators, but when speed and a reliable access to all your network data are crucial, TAPs are the obvious choice. When deciding which approach to take, SPAN ports are better suited for lower utilized networks where dropped packets will not affect analysis or in situations where cost is a factor.

On heavier traffic networks, however, the capacity, security, and reliability of TAPs will provide crucial full visibility into the traffic on your network without worrying that packets are being dropped or physical layer errors are being filtered out.